This program was for the Sockers first season in the Major Indoor Soccer League (MISL). It was the magic season of the Sockers dynasty, they came into the MISL as the NASL Champions, but most MISL teams and players believed their league was superior. By winning the MISL Title in 1983 the legitimacy of the Sockers skyrocketed.

Check out the Editorial articles inside, features include: 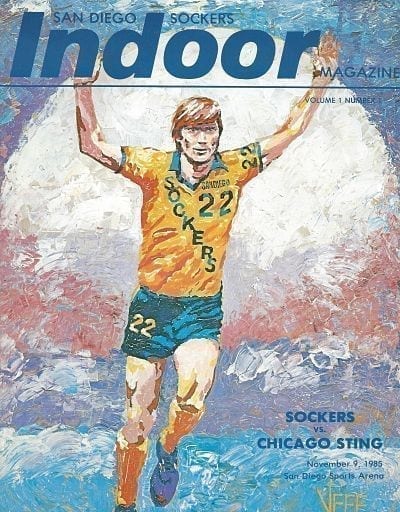 Fun While It Lasted: San Diego Sockers
What ever happened to the original San Diego Sockers soccer team that played indoor & outdoor soccer at Jack Murphy Stadium & The Sports Arena from 1984 to 1996?

“A Case of Survival” detailing the significance of the MISL’s fifth season and the 3 NASL teams that were competing that winter.

“Champion Chicago Sting Confident it will do well in MISL competition”

“Sockers’ Fans To Find Out MISL Has A Few Differences”

A great feature by Bill Center on “Julie Veee: Is He The Player To Dethrone Steve Zungul As Scoring Champ?”

And concluding with the Editor’s Page, where Julie Veee states “Indoor Soccer Is The Only Way For Soccer in This Country”

For more Sockers History, check out our friends at funwhileitlasted.net for a detailed history of the San Diego Sockers.