The San Diego Sockers of the Major Indoor Soccer League ended the 1989-90 season with a record of 25 wins and 27 losses in the MISL’s Western Division. The Ron Newman led team compiled a postseason mark of 11-5 and won their 7th Championship. The Sockers recorded 217 goals and surrendered 204. Waad Hirmez scored 29 goals for San Diego, while Brian Quinn, Rod Castro, Branko Segota and Zoran Karic each contributed fifteen goals or more. Branko Segota accounted for 34 assists. Zoltan Toth topped the squad with 14 wins and a team-best 3.48 goals against average, pacing regular keepers. 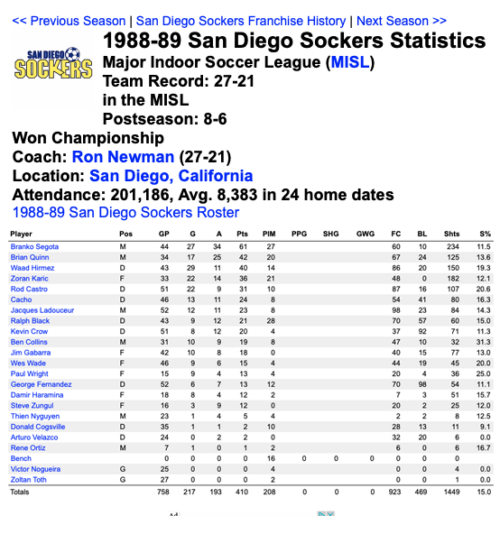 1989 San Diego Sockers soccer Statistics
The 1988–89 Major Indoor Soccer League season was the eleventh in league history and would end with the San Diego Sockers repeating as MISL champions. It was the Sockers' seventh indoor title in eight NASL and MISL seasons. The Sockers would win seventh games in both the semifinals and championship series.